Chin augmentation is a surgical procedure designed to increase the prominence of the chin. Although this is usually done for cosmetic reasons, it is also performed for the reconstruction of the face because of a birth defect or trauma. Deficiency in the size of the chin can cause a marked change in countenance, because the mid-point of the lower face strongly influences the overall appearance of both the face and neck.

Like the nose, and the rest of the jaw, the human chin shows sexual dimorphism, meaning that two different forms exist according to gender, male and female. The average proportions of the chin do differ between women and men, and this feature can lend either a distinctly feminine or masculine cast to the face.

The surgical procedures to change the form of the chin are called mentoplasty, and include more than simple augmentation. Some mentoplasty procedures reduce the size of the chin, others lengthen it or otherwise change its shape. Changes in the shape of the bone structure of the chin are usually made by making cuts in the bone of the jaw and sliding the pieces into a desired placement. As long as the bone retains a good blood supply and resists infection, the jaw will heal into the new form.

Augmentation of the chin can be brought about by the placement of a synthetic material or tissue graft under the soft tisues of the chin, by making the bone cuts called mandiblar osteotomies and advancing them forward to create more chin projection, or by some combination of procedures, like using both osteotomies and implants.

Evaluation of the chin 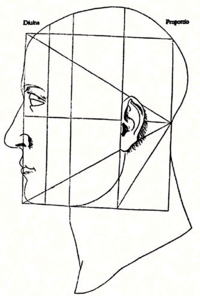 Artists have recognized the aesthetic proportions of the human face for many centuries. This woodcut, done by Luca Pacioli in 1509, shows one way to formulate ideal aspects between masculine features.

Would a particular face benefit in appearance from chin augmentation? Answering that question requires assessing the area of the chin in relation to the lips, teeth, nose, jaw and neck in all three planes: vertical, horizontal, and transverse. A receding chin is deficient in a horizontal plane, but may actually be excessive (very tall) in a vertical plane. In complex cases like that, a good result may require both a vertical reduction and a horizontal augmentation.

Synthetic implants are commercially available to surgeons in a limited array of shapes and sizes. They are made out of both solid and semi-solid materials. Most often, an incision is made either in the mouth, or under the chin. Every incision will cause a scar, but the placement of the incision is chosen so that the surgeon has needed access, and the well-healed scar is likely to be camoflauged. In this case it is either at the base of the inner lip, or in the skin crease already present under the chin.

Various tissues from other parts of the body have been harvested and used to add bulk to the chin.

Up to 5mm, advantage in terms of cost and less risk of displacement.[1]

Performed in conjunction with other cosmetic surgery

Although a change in the dimensions of the chin can markedly alter the appearance for the better in many people, it is only rarely that patients consult cosmetic surgeons to request a change in that particular feature."More commonly, requests focus on seemingly more obvious problems, such as reduction of a large nose or correction of sagging skin of the neck and jowls"[2]

When there is excessive lax soft tissue of the lower face from aging or other factors, the chin can be affected. The soft tissues of the chin can sag below the level of the bony jaw.

Although a defect limited to the chin is unusual, patients surviving gunshot wounds to the face can often benefit from mandibular reconstruction. There have been successes in taking a living piece of the patients lower leg bone (fibula free flap), along with its blood supply, and constructing a chin. Survivors of suicide attempts involving gun blasts are particularly likely to benefit from an improved facial appearance after recovery, rather than having to carry on with a devastating, and self-inflicted, facial deformity. (Lee JW. Jang YC. Oh SJ. Esthetic and functional reconstruction for burn deformities of the lower lip and chin with free radial forearm flap. [3]