The cell membrane or plasma membrane comprises the outer surface of a cell — a boundary that encloses the contents of the cell. The cell membrane is composed of a phospholipid bilayer studded with proteins. The unit structure of the phospholipid bilayer consists of two fatty acid chains that link to two of the three carbons of a molecule of glycerol. The third carbon is attached to a phosphate group, which is in turn often attached to an alcohol or amine. The alcohol makes the phosphate-alcohol group, or head group, hydrophilic. The fatty acid chains, or tails, are hydrophobic. This results in the hydrophilic parts pointing towards each other and the hydrophilic parts pointing to the extra and intracellular areas. The unit structure repeats in a parallel array that creates a three-dimensional enclosed fluid-filled surface. The fluid mosaic model of the plasma membrane holds that there are two types of proteins in the phospholipid bilayer. The first is called an integral protein. These proteins are generally fixed and cannot be removed without rupturing the cell. One type of integral protein called the transmembrane protein spans the membrane, so that its surface is both on the inside and outside of the cell. A second type of membrane protein is called a peripheral protein and can easily be removed from the membrane.

Public domain, courtesy Mariana Ruiz. The cell membrane, also called the plasma membrane or plasmalemma, is a semipermeable lipid bilayer common to all living cells. It contains a variety of biological molecules, primarily proteins and lipids, which are involved in a vast array of cellular processes. It also serves as the attachment point for both the intracellular cytoskeleton and, if present, the cell wall. 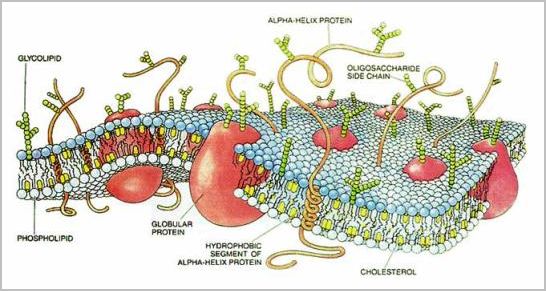 (PD) Image: National Institutes of Standards and Technology
"Cartoon of a typical cell membrane. Proteins are embedded in a matrix of phospholipid molecules. Several other membrane constituents such as glycolipids and cholesterol are also shown."

An essential feature of any plasma membrane is the ability to transport materials in and out of the cell.

Facilitated diffusion is a passive form of transport whereby specific types of molecules are chemically encouraged to cross the membrane, but are not directional. That is, molecules will only flow down a concentration gradient, which is definitionally passive transport. This is accomplished by specialized proteins embedded in the surface called channels and carriers. Channels are gaps which allow the molecule to flow through them, and are sometimes gated (that is, are only open under certain conditions.) Carriers, or porters, chemically interact with the molecule to induce a conformational change which moves the molecule to the other side of the membrane.

Active transport is the movement of molecules across the cell membrane which costs the cell energy through use of ATP, adenosine triphosphate. Typically this is because molecules must be moved up the concentration gradient to either remove or obtain the desired concentrations inside the cell. One such example of this is the sodium-potassium pump, which exchanges sodium ions for potassium ions and is essential for certain types of cellular activity, such as recovery from an action potential. Such a system is called coupled transport in which the movement of one molecules is linked to the movement of another. There are several subsets of coupled transport; the antiport, in which each molecule type is unidirectional, and the symport and uniport in which both molecules go in the same direction.

Endocytosis is the process by which a cell moves a relatively large substance into the a cell; Exocytosis is the process by which large substances are moved out of a cell. In endocytosis, the membrane surrounds the particle that is outside, invaginates, and is snipped off inside the cell. With exocytosis, the particle is put inside a vesicle, which then fuses with the membrane outside.

Endocytosis can be divided into two types; pinocytosis, which describes the intake of particles or liquids into the cell, and phagocytosis, which occurs with larger material, such as bacteria.

Receptor-mediated endocytosis, which is generally used to move large protein complexes into the cell, relies on protein receptors on the outside of the plasma membrane. These receptors are located in a clathrin-coated pits, small indentations in the membrane coated with the specialized protein clathrin. When the protein complex is fully affixed to the receptors in the pit, the protein changes conformation, invaginating the section of the membrane.

Gap junctions are areas of contact between cells through which small molecules and ions can pass from one cell to the next. This is done in the form of a pore, which are composed of 6 molecules arranged in a circle on the surface of the membrane. Changes in confirmation of these molecules opens and closes the pore.

Desmosomes are areas where cells are connected by glycoprotein filaments. This type of junction is the most common one.