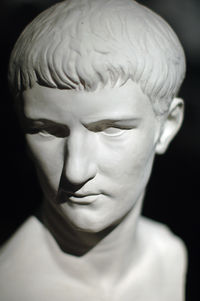 (CC [1]) Photo: Ed Uthman
A bust of the Emperor Caligula

Gaius Caesar Germanicus, commonly known as Caligula, was Roman Emperor from A.D. 37 to 41. Born in A.D. 12, he was aged 24 when he succeeded Tiberius as Emperor. Four years later he was the victim of a political coup and was assassinated. The surviving ancient literature is united in its judgement of Caligua as a mad tyrant, however modern scholarship has questioned whether he really was insane and has refuted some of the more outrageous stories about his reign.

Gaius Caesar Germanicus, later nicknamed Caligula, was the great-grandson of the Emperor Augustus, who still reigned when Gaius was born on 31 August A.D. 12.[1] Caligula was the son of Germanicus and Agrippina the Elder. Germanicus was a great-nephew of Augustus, and Augustus was the grandfather of Agrippina the Elder. The couple had three sons including Caligula (Nero and Drusus). Germanicus, who was adopted by Tiberius at Augutus' behest, was a popular figure and from A.D. 13 was commander of Rome's legions on the Rhine frontier. Caligula spent much of his early life in his father's company, and it was during this time that he was dubbed Caligula. A miniature uniform was fashioned for the boy; the Latin caligula means “little boots” and the nickname referred to the youth's outfit.[2][3] Caligula's father died on 10 October A.D. 19, possibly as the result of poisoning.[4]

One of Augustus' conditions in naming Tiberius his heir was that Germanicus would succeed him as Emperor. Though Germanicus' death meant this was no longer possible, Tiberius attempted to honour the instruction by naming Nero and Drusus heirs over his own son.[5]

In A.D. 26 the Emperor Tiberius travelled to the island of Capreae off the coast of Campania in Italy.[6] By A.D. 33 only two of Augustus' grandchildren survived: Caligula and Tiberius Gemellus. Their link to Augustus made them the two most likely heirs to Tiberius.[7]

The ancient biographer Suetonius, who wrote The Twelve Caesars in the second century, is the main source for Caligula's life and reign. A consistent theme of accounts of Caligula's reign and observations on his character is that he was insane. This view was held by Seneca and Philo of Alexandria. Both contemporaries of Caligula, and was repeated by later writers such as Suetonius himself, Pliny the Elder, and Tacitus. Modern historians have generally arrived at similar conclusions, however recently there has been an increase in people questioning whether Caligula was insane.[8]

In some cases evidence used by ancient authors to support the claims of insanity have been proven incorrect, for instance the accusation that Caligula committed incest with his sisters is first mentioned in the writings of Suetonius, and historians find it implausible that earlier well informed authors keen to discredit the emperor would not have mentioned this information. A problem with the ancient sources, as explained by Professor Aloys Winterling, is that the ones which survive “pursue the clearly recognizable goal of depicting the emperor as an irrational monster. They provide demonstrably false information to support this picture of him and omit information that could contradict it.” However, while disproving some of the stories of Caligula's reign and dismissing the theory that the emperor was insane, Winterling is cautious not to portray Caligula as a “good” ruler.[9]