A bucket (also known as a pail) is a leakproof receptacle with a handle, allowing substances that are usual liquid to be carried easily. 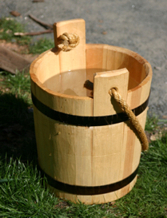 (PD) Photo: Gregor Sheer
A wooden bucket. The basic construction of these implements has changed very little since inception.

The basic design of a bucket has changed very little over the centuries. Early buckets were made of wood, with a cylindrical or tapered shape. The wood could be reinforced with metal bands. These buckets were functional, but due to the nature of wood, had a limited lifespan. Later, metal buckets were used. Today, buckets may also be rectangular in shape. Most buckets intended for household use are made of plastic. 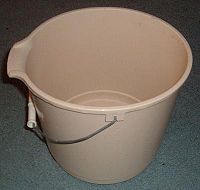 Industrial buckets are made of metal or plastic, depending on the durability needed, and what type of liquid needs to be transported.

The large, heavy, often detachable metal scoop used on an excavator, tractor or backhoe is also known as a bucket, as are the large containers carried underneath helicopters, notably to drop water onto fires.

One of the best known types of bucket in the West is the plastic child’s bucket used for playing in sand at a park or beach. This type of bucket is normally sold with a matching shovel.

The enduring nursery rhyme Jack and Jill describes the children's difficulty in getting a bucketful of water:

A popular children’s song is ‘There’s a Hole in the Bucket’ (dear Liza), an infinite loop song based on old folk songs. The English language version has been recorded many times and is often found on children’s learning and sing-along recordings. Notable recordings were by Burl Ives, Pete Seeger, Harry Belafonte with Odetta, the Muppets® and Goofy®.

'Bucket' is the name of one of the two cats who own the celebrated San Francisco Chronicle daily columnist Jon Carroll. Every two weeks or so Carroll writes a so-called "Cat Column" in which the activities of Bucket and Pancho figure prominently.[1]

Another well known bucket is the pretentious Mrs Hyacinth Bucket in the britcom Keeping up Appearances, where a running gag is Hyacinth's insistence that her surname be pronounced 'bouquet'.