From Citizendium
Revision as of 12:38, 15 May 2011 by imported>David Finn (moving external links to that subpage)
(diff) ← Older revision | Latest revision (diff) | Newer revision → (diff)
Jump to navigation Jump to search 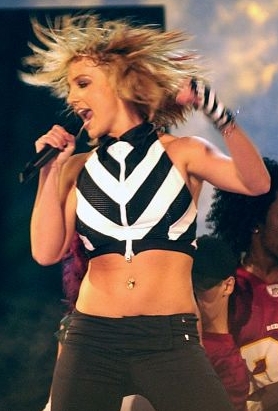 Spears performing in a concert dedicated to the U.S. Military

In 1991, Spears attended the Professional Performing Arts School and studied in the off-Broadway Dance Center. At the age of 11, she took part in the television show The All New Mickey Mouse Club. The show was cancelled in 1994. In 1999, she released her first album Baby One More Time, an extraordinary success which became the second-highest seller of the year. In the same year she appeared on the cover of the Rolling Stone magazine.

In 2007, the business magazine Forbes ranked Spears the 12th in the 20 richest women in the entertainment industry.[1]

Besides music, she is also notable for various personal controversies such as her marriages. In September 2007, she was charged with a hit and run offence and driving without a license, shortly after being dropped by her management.[2] In October 2007, a judge took away her right to her children's custody due to allegations of alcoholism and use of psychoactive drugs.[3]

Politically, she voiced strong support to the U.S. President George W. Bush in an interview with Tucker Carlson in 2003.[4] In 2009, she stated her support for legalization of same-sex marriage.[5]