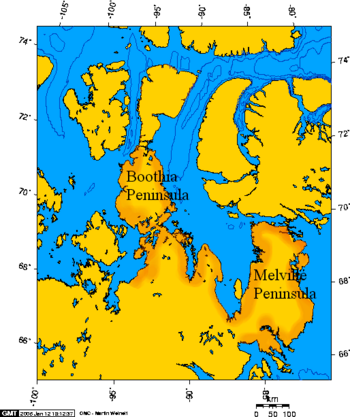 The Boothia Peninsula is a large peninsula that on the Northern Coast of Nunavut, Canada. Its Northern tip is the Northernmost location on continental North America.[1]

Failed attempts to traverse the Northwest Passage, tried to pass through the narrow Bellot Strait between the Boothia Peninsula and Somerset Island.

Tides through the strait can flow at 8 knots. Ships can be pinned within dangerous ice packs, and packs of even larger iceberg fragments.