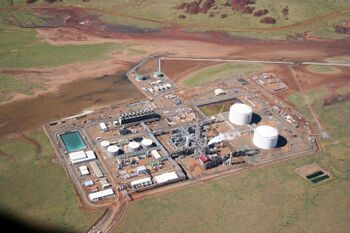 Ammonia production facilities provide the base anhydrous liquid ammonia used predominantly in fertilizers supplying usable nitrogen for agricultural productivity. Ammonia is one of the most abundantly-produced inorganic chemicals. There are literally dozens of large-scale ammonia production plants throughout the industrial world, some of which produce as much as 2,000 to 3,000 tons per day of anhydrous ammonia in liquid form. The worldwide production in 2006 was 122,000,000 metric tons.[1] China produced 32.0% of the worldwide production followed by India with 8.9%, Russia with 8.2%, and the United States with 6.5%. Without such massive production, our agriculturally-dependent civilization would face serious challenges.

Before the start of World War I, most ammonia was obtained by the dry distillation of nitrogenous vegetable and animal products; the reduction of nitrous acid and nitrites with hydrogen; and the decomposition of ammonium salts by alkaline hydroxides or by quicklime, the salt most generally used being the chloride (sal-ammoniac).

The Haber process, which is the production of ammonia by combining hydrogen and nitrogen, was first patented by Fritz Haber in 1908. In 1910, Carl Bosch, while working for the German chemical company BASF, successfully commercialized the process and secured further patents. It was first used on an industrial scale by the Germans during World War I. Since then, the process has often been referred to as the Haber-Bosch process. 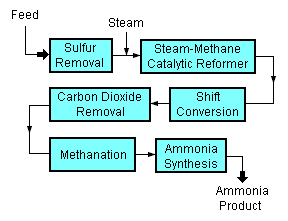 A typical modern ammonia-producing plant first converts natural gas (i.e., methane) or LPG (liquified petroleum gases such as propane and butane) or petroleum naphtha into gaseous hydrogen. The method for producing hydrogen from hydrocarbons is referred to as "steam reforming".[2][3][4][5] The hydrogen is then combined with nitrogen to produce ammonia. [6][7]

Starting with a natural gas feedstock, the processes used in producing the hydrogen are:

To produce the desired end-product ammonia, the hydrogen is then catalytically reacted with nitrogen (N2) derived from process air to form anhydrous liquid ammonia (NH3). This step is known as the "ammonia synthesis loop" (also referred to as the Haber-Bosch process):

The nitrogen required for the Haber-Bosch process is obtained in either of these two ways:

The steam reforming, shift conversion, carbon dioxide removal and methanation steps each operate at absolute pressures of about 25 to 35 bar, and the ammonia synthesis loop operates at absolute pressures ranging from 60 to 180 bar depending upon which proprietary design is used. There are many engineering and construction companies that offer proprietary designs for ammonia synthesis plants. Haldor Topsoe of Denmark, Technip of France, Uhde GmbH of Germany, and Kellogg Brown & Root of the United States are among the most experienced companies in that field.

About 80% or more of the ammonia produced is used for fertilizing agricultural crops in the form of aqua ammonia (an aqueous solution of ammonia), ammonium sulfate (NH4)2SO4, ammonium phosphate (NH4)3PO4, ammonium nitrate NH4NO3 and urea (NH2)2CO. Some anhydrous liquid ammonia is also used directly as a fertilizer.

Ammonia is also used for:

There are several safety-related concerns with anhydrous ammonia and with aqueous solutions of ammonia. It is a respiratory irritant that is a highly hazardous chemical.[8] Release could take place through a simple industrial or transportation accident, a deliberate release caused by terrorists, or by improper handling by those using it in the illegal synthesis of methamphetamines.

Storage tanks on farms used for dispensing ammonia as fertilizer are referred to as nurse tanks and contain approximately 2,500 pounds (1134 kg) of anhydrous ammonia, so any farm with four or more nurse tanks needs to assess its safety. In fact, the U.S. Environmental Protection Agency (U.S. EPA) mandates the performance of an Offsite Consequence Analysis (OCA) as part of their Risk Management Plan (RMP) requirements for any facility that stores more than 10,000 pounds (4,536 kg) of anhydrous liquid ammonia or 20,000 pounds (9,072 kg) of aqueous solutions of ammonia.[9] The RMP requirements apply for ammonia refrigeration systems or any other ammonia storage facilities as well as farms. The U.S. Occupational Health & Safety Administration(OSHA) has mandated very similar requirements as part of Process Safety Management (PSM) regulations for hazardous chemicals.[10]

In transport, ammonia containers must have proper hazardous material placards, and, if the pertinent threshold quantity is exceeded, may need additional safeguards, such as reporting the shipment to industry monitoring services such as CHEMTREC[11] or additional local agencies. There may be restrictions on transporting hazardous materials through tunnels, or possibly streets in high-density areas.

The U.S. Department of Homeland Security, citing its major concern as toxic release, lists anhydrous ammonia, or mixtures containing at least 1 percent ammonia, when stored in quantities of 10,000 pounds or more, as a chemical of interest,[12] which falls under the Risk for Chemical Facility Anti-Terrorism Standards (CFATS) regulations and guidance.[13] Organizations that store or transport more than the threshold quantity of 10,000 pounds, or believe they are at a higher than normal risk, should use the Chemical Security Assessment Tool. [14]

The Environmental Protection Agency has issued an additional safeguards document, with special emphasis on the theft of ammonia.[15]