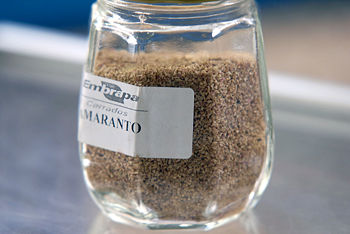 Amaranth is a name given to many different flowering herbs in the family Amaranthaceae. Its name is from Greek for "unwithering", and it was a symbol of immortality to them.

Amaranths, particularly the green amaranth, were cultivated by natives of the Americas as an important food plant. Seeds from its head were eaten whole or ground into flour. Amaranth leaves could be eaten raw, boiled, or as an ingredient in soups.

Many species of amaranth are still widespread in the Americas. Pigweeds are all amaranths, as are the famous tumbleweeds of the western United States. Amaranth flour is still commercially available.

In Europe, the amaranth is known as an ornamental family. Love-lies-bleeding (native to Africa and Java), cockscomb (African and American tropics), and prince's feather (India) are some of the better-known varieties.