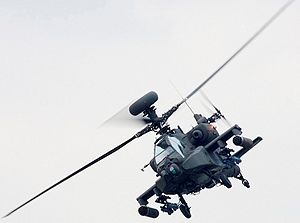 It can operate in day or night, and in all weather. Its combat roles include close air support as well as battlefield air interdiction, although its ability to penetrate alerted air defenses, without support from other arms, as seen at the 2003 Battle of Karbala is not that of a high-performance fighter-bomber. With surprise, however, it can be a potent deep strike weapon. AH-64's, with navigational assistance from United States Air Force MH-53 PAVE LOW special operations helicopters, struck the first target in the 1991 Gulf War, an Iraqi early warning radar. 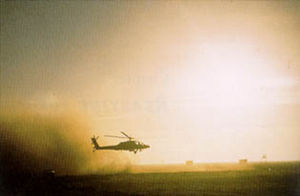 Its primary weapons against tanks and other high-value targets is the AGM-114 Hellfire missile; it also has a 30mm M230 autocannon, which is essentially a M242 Bushmaster firing larger ammunition. The Apache can also carry Hydra 70 unguided rockets.

There is an AN/AVR-2 laser warning receiver.

Its rated maximum speed is 145 knots. Depending on the model, it has a maximum gross weight of 230-240 nmi, which can be extended with modular fuel tanks.

The crew normally wears night-vision goggles when appropriate. Its AN/AAQ-11 Pilot Night Vision Sensor (PNVS) consists of a FLIR in a rotating turret located on the nose above the TADS. The image from the PNVS is displayed in the monocular eyepiece of the Honeywell Integrated Helmet And Display Sighting System, IHADSS, worn by the pilot and copilot/gunner.

The AH-64D has major avionics upgrades, including a mast-mounted millimeter wave radar and fire-and-forget control for its Hellfire missiles. Using the Longbow radar and control system, the AH-64D can engage 16 simultaneous targets with Hellfires that the guiding or additional Apaches fire. The Hellfires also can be guided by OH-64 Kiowa Warrior scout helicopters equipped with Longbow. To actually carry out an attack, the radar is unmasked for 30 seconds and then remasked, and the engagement parameters for up to 256 targets are determined. 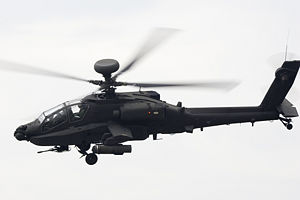 (CC) Photo: Steve Smith
Side view of the AH-64 Apache; Longbow system is in the "disco ball" above the rotors

Mounted in a turret below the PNVS is the AN/ASQ-170 Target Acquisition Designation Sight (TADS). It has direct-view optics, television and three-fields-of-view forward-looking infrared (FLIR) to carry out search, detection and recognition; it also has a Litton laser rangefinder/designator.