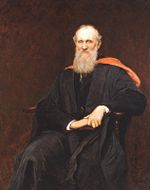 William Thomson (June 26, 1824 – December 17, 1907), later Baron Kelvin of Largs, was a British scientist who developed the concept of absolute zero and devised a temperature scale based on it, which is now named in his honour. Born in Belfast, he moved with his family to Glasgow in 1831 when his father accepted a position at the University of Glasgow as a professor of mathematics. Thomson would, in turn, become a professor of natural philosophy (physics) at the same university at the young age of twenty two. In the first part of his career Thomson made pioneering contributions to the field of thermodynamics and the theory of electromagnetism. Later in life he played a crucial role in the laying of the first transatlantic telegraph cable.