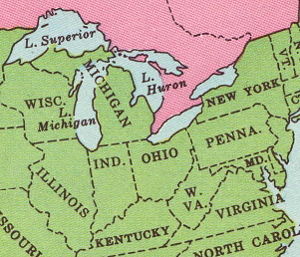 West Virginia is one of the states constituting the United States of America. It was admitted to the Union as the 35th state on June 20, 1863; the initially proposed name was Kanawha, which is now the name of one of its counties.

It has an area of 24,232 square miles (62,761 square kilometers) and an estimated population of 1,812,035 (in 2007). It is bordered by Pennsylvania to the north, Maryland and Virginia to the east, Kentucky to the southwest, and Ohio to the northwest. The state capital is Charleston.

Until the American Civil War, what is now West Virginia was part of the Commonwealth of Virginia. But when a convention in that state voted to secede from the Union on April 17, 1861, most of the delegates from the area that is now West Virginia were opposed. Residents of the western part of the state elected delegates to two conventions, which met in the city of Wheeling in May and June. The second convention repudiated Virginia's secession and set up a "Restored Government of Virginia," loyal to the Union, with Francis H. Pierpont as governor.

There were now two rival entities claiming to be the legitimate government of the entire state of Virginia: the pro-Confederate government in Richmond, and the Restored Government in Wheeling; the U.S. Congress recognized the Wheeling government. The newly elected legislature of the pro-Union government voted in May 1862 to give its assent to the partition of Virginia into two states. (The U.S. Constitution forbids the partition of a state unless both the state's own legislature and the federal Congress agree to it.) Congress agreed late in 1862 on a vote that went almost entirely along party lines, with Republicans favoring the creation of the new state and Democrats opposing it. Even some members of Congress who voted for the new state doubted the constitutionality of the procedure; Representative Thaddeus Stevens of Pennsylvania, for example, argued that it was illegal but was nevertheless justified as an emergency war measure.

President Abraham Lincoln also had doubts. He asked his cabinet's opinion as to the legality of the procedure and was presented with a tied vote. On December 31, 1862, Lincoln signed the statehood bill, explaining that he did not consider this wartime measure to be setting any precedent that would have to be followed in peacetime, and arguing that if West Virginia's actions amounted to secession, at least it was "secession in favor of the Constitution," rather than secession against it, of which the Confederacy was guilty. Lincoln referred to the Wheeling legislature as "a body claiming to be" the legislature of Virginia, and declared the admission of the new state to be "expedient," while avoiding words such as "legal" or "constitutional."

The next day, January 1, 1863, Lincoln issued the Emancipation Proclamation, ordering the freeing of all slaves in areas currently in rebellion against the United States, but specifically exempting West Virginia. Before approving the admission of West Virginia to the Union, however, Congress had required that the new state's constitution include a provision for gradual emancipation of slaves[1] (a provision rendered moot by the Thirteenth Amendment, which abolished slavery nationwide in December 1865). [2]