Now retired, W54 nuclear weapon was the lowest-yield weapon ever deployed by the United States. It was best known as the "backpack" special atomic demolitions munition (SADM), but was also used as the warhead of the AIM-26 Falcon air-to-air missile and of the Davy Crockett artillery weapon. Its yield, depending on the model, was in the 10 ton to 1 kiloton range.

The SADM version is most historically significant, as it is one point of reference for the potential of a portable nuclear weapon, and the unlikely existence of "briefcase" implementations. The warhead itself weighed 58.6 pounds, and a complete assembly, in its shipping container, weighed "less than 163 pounds". Since it could be carried, as a backpack, by a single paratrooper, the fielded version, removed from the container, probably was in the 100 pound range.[1] 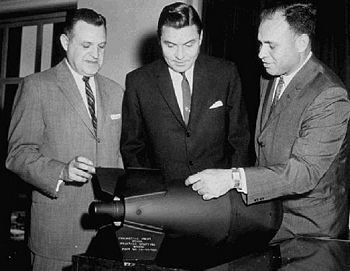 As the Davy Crockett version, it was a 51-pound warhead, fired from a 155mm recoilless rifle, mounted on a tripod or on a jeep. The yield was 18 tons. [2] The 2.5 mile range of the recoilless rifle made its use tactically impractical in any defensive mode; it would have to be so close to the enemy that it could easily be overrun before permission was granted for its use.

The SADM was reported to have only a combination lock and timer as a safeguard.