Description of a vapor-liquid separator 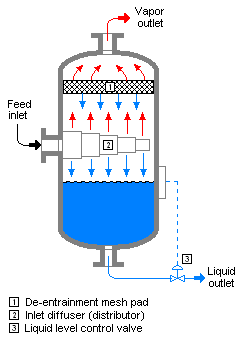 A vapor-liquid separator is a most often a vertical vessel used in many industrial applications to separate a vapor-liquid mixture. Gravity causes the liquid to settle to the bottom of the vessel, where it is withdrawn.[3][4][5][6] The vapor travels upward at a design velocity which minimizes the entrainment of any liquid droplets in the vapor as it exits the top of the vessel.

The feed to a vapor-liquid separator may also be a liquid that is being partially or totally flashed into a vapor and liquid as it enters the separator.

When used to remove suspended water droplets from streams of air, a vapor-liquid separator is often called a demister.

Some vapor-liquid separators are horizontal vessels and, in such cases, the following methodology for using the Souders-Brown equation must be adjusted to be applicable.

Calculate the maximum allowable vapor velocity in the vessel by using the Souders-Brown equation:

Then the cross-sectional area of the drum (A) is obtained from:

And the drum diameter (D) is:

The drum should have a vapor outlet at the top, liquid outlet at the bottom, and feed inlet at about the half-full level. At the vapor outlet, provide a de-entraining mesh pad within the drum such that the vapor must pass through that mesh before it can leave the drum. Depending upon how much liquid flow is expected, the liquid outlet line should probably have a liquid level control valve.

As for the mechanical design of the vessel (i.e., materials of construction, wall thickness, corrosion allowance, etc.), use the same criteria as for any pressure vessel.

Where vapor-liquid separators are used

Vapor-liquid separators are very widely used in a great many industries and applications, such as: