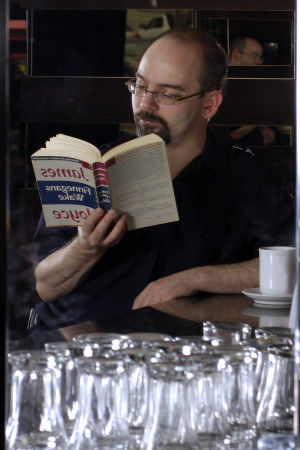 As the photographer set up for this portrait, an Orangeman's marching band paraded by - wouldn't Joyce have been tickled at the synchonicity! (Psst, the shot was taken through a mirror.)

"...I am at an educational conference listening to a speech by a high authority in the field. I know him to be a good scholar, a dedicated servant of society, and an admirable person. Yet his speech is a muddy river of clichés, flowing stickily into a delta of banalities at the peroration. The content of the speech does not do justice to his mind: what it does reflect is the state of his literary education. It is not that he has never read good literature, for he has the literary tastes that one would expect a cultivated man to have. But he has never been trained to think rhetorically, to visualize his abstractions, to subordinate logic and sequences to the insights of metaphor and simile, to realize that figures of speech are not the ornaments of language, but the elements of both language and thought. And because his main scholarly interests lie outside literature, he has never been compelled to make up for these deficiencies himself. The result is that he is fluent without being articulate, and cannot break out of an armour of ready-made phrases when he tries to express his real convictions. Once again, nothing can now be done for him: there are no courses in remedial metaphor." - from The Stubborn Structure by Northrop Frye (Metheun 1970) 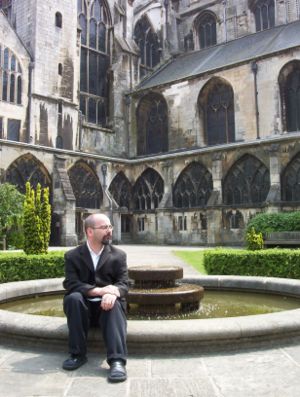 Relaxing by the fountain at the Hogwarts School of Witchcraft and Wizardry (a.k.a. Gloucester Cathedral)