With the rocket development of Internet, the techniques used for building web pages is improving all the time, which not only brings people more information but new experience of surfing on the Internet. Many techniques have been applied to enrich the web page these years, from totally the plaintext in early 90's, first to web page with pictures and then that with embedded sounds. Later, Sun Microsystems proposed Java Applet, which was popular for not long time until being conquered by Adobe Flash. Now Microsoft proposed Silverlight technology. Some people say that Microsoft made a wrong decision while others claim that Silverlight will kill Flash at last. According to the next step in the value chain, for Flash, it focus on building rich applications with Flex. For Silverlight, Ajax is becoming the way to add more value. 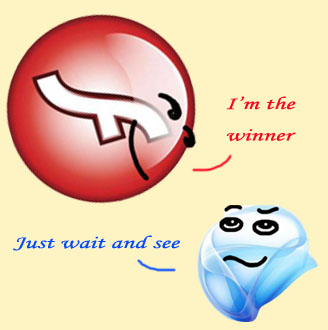 When it comes to general technology features, both Flash and Silverlight have the same functions and benefits as follows:

On the other hand, both of them have their unique features. For example, Flash has offline document support, rich set of control library and test tools. While Silverlight has hardware-assisted editing and encoding solutions, XML-based presentation for Search Engine Optimization (SEO), and content access protection, Digital Rights Management (DRM).

Below is the table of technology comparison between Flash and Silverlight.

Flash is frame based, which requires users to compute the duration of an animation. For example, there are 12 frames per second in Flash animation model. If users want an object to move 5 seconds continuously, they need to calculate how many frames 5 seconds will take. Also, the player doesn't maintain any frame rate unless users embed blank audio tracks.

Instead of frame based, Silverlight supports the time based Windows Presentation Foundation (WPF) animation model, which allows users to define the start and end conditions without calculating positions on various frames. Then Silverlight can generate animation process automatically.[1]

Flash supports multiple video formats with high quality codec and nice bandwidth usage, such as scalable full screen video up to HD(720p). The price of its media server licensing(unlimited bandwidth) is only one forth of that of Silverlight. Except for its Sorenson’s proprietary H.263 codec, Flash has no industry standard video codec yet. In addition, the audio formats supported by Flash are all proprietary, except for the MP3 and Adaptive Differential Pulse Code Modulation (ADPCM) formats, whose quality of compression are not impressive, and still require licensing fees and third party conversion libraries.

The table below shows the comparison of video codec between Flash and Silverlight using different computer systems.[2]

Flash stores shapes using binary shape records. In order to write shape definitions, users need to either license a third party Flash file format SDK, or build their own libraries. On the other hand, Silverlight uses text based Extensible Application Markup Language (XAML), which can be output using an XML object. This means that the users do not need to have their own special libraries.

Flash stores fonts glyphs using the same exact shape definitions that are used for any other shape. The player does not understand the True Type Font (TTF) files, which requires users to use the Win32 APIs to figure out the intricacies of fonts in the Flash file format documentation. But in Silverlight, the WPF engine lets users embed True Type Font (TTF) information directly into projects, and download that information using the downloader object without doing any other extra work.

However, with the capability of compiling down into the binary, Flash can actually starts executing before it is fully downloaded, which is one of the serious benefits to using binary SWF (Shockwave Flash) and more satisfying than the pure text files in Silverlight, which brings the runtime from zero to hero before one can do anything. Furthermore, Flash has plenty of functionality encapsulated in the runtime. It has its own just-in-time (JIT) compiler, ActionScript and a healthy set of controls. On the other hand, Silverlight uses JavaScript as the scripting language and depends on the browser for most of the interaction processing.

Adobe also provides its own developing tools to assist developers in creating Flash animations/applications. Such tools are Adoble Flash and Adobe Flex. However, compare to Silverlight, programming language supported by Flash is very limited. It is only supported by ActionScript.

According to a survey given by Adobe System in June 2008, 99% of computer users have installed Flash Player. But until then, there was still no official statistics about Silverlight given by Microsoft.

This significant difference of market share between Flash and Silverlight may due to following reasons:

Although Silverlight has many advantages over Flash, it pales in front of Flash in terms of availability. It is not a unique Microsoft problem but a problem for every new offering when there is an incumbent who has a majority market share. Because Flash is so ubiquitous that it pushed QuickTime, Real Player, and windows movie files right out of the web space. As a juvenile in market, Silverlight may need a long time to get acceptance for itself.