See the tab above for Recipes of Navy Grog. 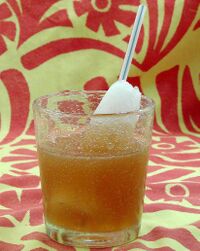 The Navy Grog was a popular rum-based drink served for many years at the Polynesian-themed Don the Beachcomber restaurants; it is still served in many so-called tiki restaurants and bars. First created by Donn Beach, who almost single-handedly originated the tiki cultural fad of the 1940s and 1950s, it was one of dozens of rum concoctions that he, and later Trader Vic and numerous other imitators, sold in exotic tropical settings. Not quite as potent as the Beachcomber's more famous Zombie, it was, nevertheless, shown on the menu as being limited to two, or sometimes three, to a customer. Reportedly, Phil Spector consumed at least two Trader Vic’s Navy Grogs at the Beverly Hilton restaurant, without eating any food, the night he later killed actress Lana Clarkson.

The word "grog" itself can refer to a variety of alcoholic beverages. It originally referred to a drink made with water and rum, which was introduced into the Royal Navy by British Vice Admiral Edward Vernon on August 21, 1740. Vernon himself had been nicknamed "Old Grog" because of a grogram cloak he habitually wore, and the nickname became attached to the drink.[1][2] Modern versions of the drink are often made with hot or boiling water, and sometimes include lemon juice, lime juice, cinnamon, or sugar to improve the taste. Rum with water, sugar, and nutmeg was known as Bumboo and was more popular with pirates and merchantmen.

Compared to the Zombie or Beach's recipe for a Mai Tai, Don the Beachcomber's recipe for a Navy Grog was relatively simple. There were only three kinds of rum, for instance, instead of five, and no other alcohol such as triple sec, Pernod, or cherry liqueur. There are several variant recipes, however, and all of these use fresh lime juice and grapefruit juice along with the rums. Some, though, also add passionfruit juice, while others use guava juice or club soda water instead. Some recipes specify a sweetening agent of honey mixed with unsalted butter, while others use honey mixed with water.[3] Unlike the other two drinks, Navy Grog uses no exotically flavored syrups such as orgeat or falernum.

Some sources say that the Navy Grog was Frank Sinatra's favorite drink at the Hollywood restaurant where it was first served.[4] Whatever the exact recipe, traditionally it has always been served very cold in a large, broad-based old fashioned glass, into which a frozen snow cone of shaved ice has been placed, so that the customer sips the Grog through a straw that runs down through the cone.