Intra-squad radios are wireless communicators to be carried by every soldier in an infantry unit. Special operations personnel, such as United States Army Special Forces, had had this capability for some time, as with the AN/PRC-148 unit. The United States Marine Corps had used an interim commercial short-range radios, designated AN/PRC-343, but there is now a formal program, called the "Rifleman Radio", within the Joint Tactical Radio System. The latter is designated the AN/PRC-154.

They complement squad tactical radios used for the squad leader to talk to the next level of command.

In 2004, awaiting the JTRS development, the U.S. Marine Corps specified a modified commercial radio called the Integrated Intra-Squad Radio, designated AN/PRC-343. The radio was developed in Britain and variants are used in many countries. 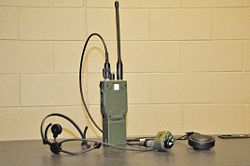 Under the JTRS Handheld, Manpack, Small Form Fit radios (HMS) program, the device provides both voice communications and GPS position information; the latter lets the squad leader and soldiers know one anothers' location at all times. While the Rifleman Radio will work alone, it is part of the Future Combat Systems' Ground Soldier System Ensemble that improves situational awareness for all leaders. This individual radio will also work with Ground Mobile Radio and HMS Manpack radios at the next levels of command.

Advanced radio technology eliminates the concern that terrain might block radio transmissions is putting the radios into a self-organizing network, so each radio in the squad receives and retransmits signals, acting as relays between troops that might otherwise not have a clear path among them. By distributing the retransmission, the individual radios use less power, increasing battery life while making them harder for an enemy to intercept and track.

The device in testing has Type II National Security Agency approved built-in encryption. Type II is adequate for tactical communications, but does not require the person issued the radio to have a security clearance. "At Fort Bliss, the 1st Armored Division used the GPS features of the Rifleman Radio in a shoot-house situation. Squad leaders positioned outside of a darkened room were able to locate and identify the positions of each member of their team through the PLI. [2]."