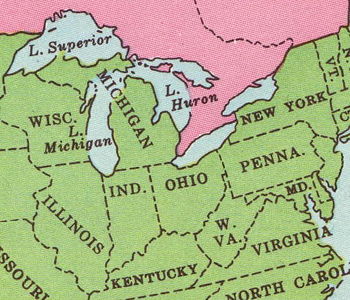 Indiana is a state in the Midwestern region of the United States of America. Its area is 36,185 square miles (93,720 square kilometers) and its estimated population was in 2008: 6,376,792. The state borders Lake Michigan and the state of Michigan on the north, Ohio on the east, Kentucky on the south, and Illinois on the west. The capital has been at Indianapolis since 1825, nine years after Indiana was admitted on December 11, 1816, as the 19th state of the Union.

The University of Indiana (founded in 1820 as Indiana Seminary) consists of the campuses in Bloomington (main campus), Gary, South Bend, Kokomo, New Albany, and Richmond, as well as of schools operated in cooperation with Purdue University at Fort Wayne and at Indianapolis. Indiana State University is seated in Terre Haute. The state university was created in 1865 as the Indiana State Normal School, and instruction began in 1870.