Elin Maria Pernilla Nordegren, born January 1, 1980 is notable as the wife of golfer Tiger Woods. She has been the subject of intense international media scrutiny after a traffic accident involving her husband, in which she reportedly used a golf club to smash a car window to rescue him.[1] In the ensuing weeks, there were allegations that other women had been having affairs with the golfer. The marital infidelity led to speculation about a possible divorce[2] leading to media stories speculating about the results of a possible divorce,[3] but there were reports in January 2010 that the couple was staying together.[4] Nordegren is a former Scandinavian model[4] and has been spotted in malls in Florida carrying around her two-year old daughter.[5] There was speculation that quarreling between Nordegren and Woods had been intense at times.[6] She has been photographed in public with her two children.[7] Woods announced he would take an "indefinite break" from golf to work on his marriage.

According to the New York Daily News which quoted Gerald Posner of The Daily Beast Web Site, Nordegren became suspicious that her husband was having relations with other women.[8] She used her husband's cell phone to text a message to her rival, Rachel Uchitel, pretending to be Tiger Woods; the message said "I miss you" and asked "When are we seeing each other again?"[8] Uchitel texted back, which confirmed Nordegren's suspicions.[8] According to the source, Nordegren was so angry that she chased Woods out of their Florida mansion, brandishing a golf club, and this apparently led up to the incident in which Woods crashed their SUV.[8] Not only the vehicle damaged, but Woods' image as a "family man" changed into the image of a "philandering husband" and "serial cheater with a harem of hotties," according to the source.[8]

Nordegren was born in Stockholm, Sweden, to radio journalist Thomas Nordegren and politician Barbro Holmberg.[9][9] She has an older brother, Axel, and a twin sister, Josefin.[10] [11] She began modeling in 2000 and appeared on the cover of Cafe Sport magazine in 2000. She took a job as a nanny to Swedish golfer Jesper Parnevik and moved to the United States.[12] She met Tiger Woods at the British Open in 2001.[13][14] In November 2003, Woods and Nordegren attended the Presidents Cup tournament in South Africa and became officially engaged when Woods proposed at the luxury Shamwari Game Reserve. They married in October 2004 by the 19th hole of the Sandy Lane resort in Barbados and guests included Oprah Winfrey, Michael Jordan, Charles Barkley and Bill Gates. Woods rented the entire complex for a week, including three golf courses and 110 rooms, for $2 million.[15] Nude photographs purporting to be of Nordegren began circulating on the Internet but they were established to be fakes.[16][17] Despite the debunking, in 2006, the Irish magazine The Dubliner published the nude photographs and stated they were of Nordegren.[18][19] On November 16, 2006, Nordegren filed a libel suit against The Dubliner.[20] Nordegren won the lawsuit, and as part of the settlement accepted by a Dublin court, The Dubliner was required to publish a lengthy apology in a variety of venues.[21][22][23] 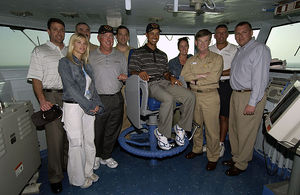 In 2003, Nordegren was engaged to Woods, and accompanied him on a visit to a US navy ship in the Arabian Gulf.

On June 18, 2007, Woods announced the birth of the couple's daughter, Sam Alexis Woods, a day after finishing second in the U.S.Open.[24] On September 2, 2008, Woods announced they were expecting another child in late winter.[25] Five months later it was announced that Elin had given birth to a boy on February 8, 2009.[26]