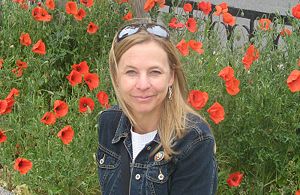 Dana D. Nelson (born 1959) is the Gertrude Conaway Vanderbilt Professor of English [1] at Vanderbilt University and a progressive advocate for democratic political reform. She is an outspoken advocate for her view of citizenship[2] and democracy as well as a critic of the unitary executive theory and presidentialism. Her studies focus on early American literature and culture whose research and teaching are chiefly concerned with issues of citizenship and theories of democratic government.[3]

Presidentialism and the Unitary Executive

The once-every-four-years hope for the lever pull sensation of democratic power blinds people to the opportunities for democratic representation, deliberation, activism and change that surrounds us in local elections.[6]

One reviewer wrote that Nelson's conception was that presidentialism was a "result of the American citizenry's tendency to look to the sitting president as simultaneously a unifier of the citizenry and a protector from political threats."[7] Another reviewer wrote: "Bad for Democracy surveys the evolving role of the president in the national psyche, and examines how presidential powers have expanded far beyond the intentions of the Constitution's framers ... Nelson combines her analysis with a plea for a return to grassroots democracy and activism."[8]

Nelson explained in an interview: "My book argues that our habit of putting the president at the center of democracy and asking him to be its superhero works to deskill us for the work of democracy. And, it argues that the presidency itself has actually come to work against democracy."[9]She argues Americans tend to "super-size the presidency" and this is at odds with what the founding fathers might have wanted.[10] One reviewer compared her book to author Gene Healy's The Cult of the Presidency in which the president was described as the "Chief Legislator, Manager of Prosperity, Protector of the Peace, World Leader -- and more."[11]

Newspaper columnist David Sirota wrote "this culture of 'presidentialism,' as Vanderbilt Professor Dana Nelson calls it, has justified the PATRIOT Act, warrantless electronic surveillance and a radical unitary executive theory that aims to provide a jurisprudential rationale for total White House supremacy over all government."[12] Nelson advocates a grassroots effort to restore democracy. She explained in 2009: "We stop waiting for someone else to do it for us. We organize together, using public spaces and the internet. We form blogs, we write letters to the editor, we show up at Congress, we protest, we call, we lobby, we boycott, we buycott, we email our representatives, we find supporters, we get them moving, we grow the movement. We ignore the idea that the right president will do it for us and find every way we can to do it ourselves. Great if the president will help but totally unnecessary."[9] Nelson has spoken on National Public Radio.[10]

She wrote an opinion piece in the Los Angeles Times about the theory of the unitary executive. All presidents have striven to expand executive power but she cites Ronald Reagan who expanded unilateral powers and promised "undivided presidential control of the executive branch and its agencies" as well as adversarial relations with Congress.[13] Proponents of the unitary executive "want to expand the many existing uncheckable executive powers -- such as executive orders, decrees, memorandums, proclamations, national security directives and legislative signing statements -- that already allow presidents to enact a good deal of foreign and domestic policy without aid, interference or consent from Congress."[13] She added "each president since 1980 has used the theory to seize more and more power."[13]

She is writing Ugly Democracy which explores alternative notions of democracy and why they were lost from our "democratic archive for citizenship" and probes possible alternatives for today.[2]

Nelson earned a bachelor’s degree from Indiana University of Pennsylvania in 1984[14] and master’s (1986) and doctoral degrees (1989) from Michigan State University.[14][15] She was associate professor of English at the University of Kentucky in 1998.[16] Nelson's The Word in Black and White: Reading "Race" in American Literature, 1638-1867 was named the "an Outstanding Academic Book of 1992-1993 by Choice."[17] The book explored how eleven "Anglo-American authors constructed 'race'" including a study of The Last of the Mohicans and Incidents in the Life of a Slave Girl, and earned positive reviews.[17]

She taught at the University of Kentucky, Duke University, the University of Washington, and Louisiana State University.[17] In 2006, she co-edited with Russ Castronovo a collection of essays entitled Materializing Democracy: Toward a Revitalized Cultural Politics. One reviewer described the effort as an "ambitious, multi-disciplinary effort to make the subjective turn by warning against the danger of reducing democracy to 'an exclusively moral category that is no longer connected with political, economic, or social categories.'"[18] In 2007, she wrote about democracy.[3] She edited 19th century abolitionist Lydia Marie Child's A Romance of the Republic in 2003.[19]

In 2009, Dana D. Nelson is professor of English and American studies at Vanderbilt University. She teaches U.S. literature,[7] history, and culture and courses that connect activism, volunteering, and citizenship.[9] She has lectured at colleges such as Purdue University and the University of Kentucky.[20] She has published numerous books, essay collections, and articles on U.S. literature and the history of citizenship and democratic culture. Nelson lives in Nashville where she is involved in a program that helps incarcerated women develop better decision-making skills and works with an activist group fighting homelessness in the area.[9]