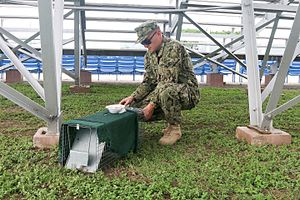 There is an on-going program to trap Guantanamo's feral and roaming cats.

All the cats of Guantanamo are descended from cats brought in since Cuba was colonized by Europeans. They represent a threat to native wildlife.[1][2][3][4][5][6] Animal control officials struggle, in vain, to control the population of feral cats and former pet cats that roam the Guantanamo Bay Naval Base.[7] Base personnel are allowed to keep cats as pets, but many cats are abandoned when their owner's assignment is over.

The presence of cats on the base stirred controvery when Muhammad Rahim al Afghani, one of the "high-value detainees", reported that base personnel allowed fellow "high-value" individual Majid Khan to befriend a roaming cat, and make it a pet.[8][9][10][11][12] Khan, a peripheral figure who Prosecutors expected to testify against 9-11 mastermind Khalid Sheikh Mohammed, had pled guilty after a negotiated plea bargain, and Al Afghani's lawyer, Carlos Warner, suggested that Khan had been uniquely permitted to keep a pet as one of the conditions of that plea bargain.

Toronto Star journalist, Michelle Shephard described how roaming cats could be coaxed to eat scraps near the base's many fast food joints when she reported on speculation that Khan had surreptiously tamed a roaming cat.[8]

All pets at Guantanamo are supposed to be chipped.[5] Roaming cats that are not chipped are euthanized. If the original owner can be located the pet may be returned. Roaming animals that are chipped, that are tempermentally suited, may have an opportunity to be adopted.

In January, 2017, proponents of controlling feral cats through a trap, neuter and release program, requested base commander, Dave Culpepper, to let them initiate a trap, sterlize and release program at Guantanamo. Guantanamo's feral cat population was estimated to number at least 500 individuals.[13][14] Culpepper declined, claiming he didn't have the authority to go against the DoD policy of euthanization.

So the animal rights advocates fell back to rescue.[15][16] Ruby and Glynn Meade, a couple who had worked on the base for decades, started a crowd-funding initiative to raise funds to relocate the two dozen abandoned cats they cared for to Lancaster, South Carolina, when they retired.[17]

On May 14, 2017, pilots and paws, an anmial rights organization in South Carolina, flew a small plane with a cargo of 25 cats from Guantanamo to Lancaster.[15][16] The Meade's property is large enough to house two dozen cats, but they hope they will find neighbours to adopt most of the cats into their home. They plan to keep their particular favorite cats themselves.