From Citizendium
(Redirected from Bilingual)
Jump to navigation Jump to search 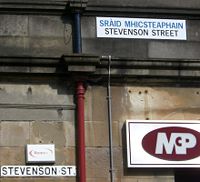 Newer streets signs in parts of western Scotland display names in Scottish Gaelic above English - older signs are in English only. This promotion of Gaelic is an example of language planning, in which languages are given political support to maintain or create a multilingual society.

A multilingual individual need not be completely fluent or a native speaker of either language, nor do they need to regularly use both languages. Multilingualism is the norm in most societies, and frequently speakers may command upwards of three or four different languages. In some cases, the languages may be highly similar, such that speakers of one can readily understand the other, but if culturally they are considered separate tongues, then speakers may still be regarded as multilingual.