Beatrix of the Netherlands

From Citizendium
(Redirected from Beatrix, queen of The Netherlands)
Jump to navigation Jump to search 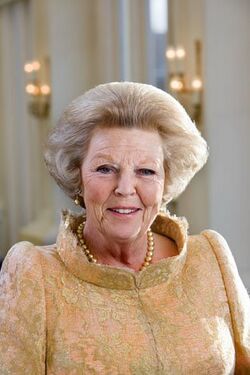 Beatrix (Baarn, 31 January 1938 – ) is Queen of the Kingdom of The Netherlands. She was crowned on 30 April 1980 when she succeeded her mother, Queen Juliana, who abdicated on the same day.

After the German invasion of May 1940, Juliana, Beatrix, and Irene went into exile in Canada in the city of Ottawa, where they would stay during the remainder of World War II. Prince Bernhard stayed for the greater part of the war in London with his mother-in-law, Wilhelmina der Nederlanden, who was then Queen-in-exile of the Netherlands. On August 2 1945 the family returned to the Soestdijk Palace (together with Margriet, who was born in Canada in 1943).

In April 1950, Princess Beatrix entered high-school and on June 2, 1956 she passed her school-graduation examinations (Gymnasium A). In the same year she enrolled at the University of Leiden to study parliamentary history and constitutional law. She graduated on July 7, 1961. In March 1956 she became a member of the Nederlands-Hervormde Kerk (the Dutch Reformed Church).

On March 10, 1966 Princess Beatrix married Claus George Willem Otto Frederik Geert von Amsberg (1926 – 2002), a German career diplomat. Claus von Amsberg was from well-to-do background, but had no noble title; to marry a commoner was at that time a very unusual step for a member of a Royal Family, a Crown-Princess at that. Still, this fact did not meet much resistance in The Netherlands and, moreover, directly after the wedding Claus was granted the title "His Royal Highness, Prince of The Netherlands". More controversial was the fact that before the wedding he still had German nationality and that he had served as an Ensign in Hitler's armies. With time, however, the protests died down and he became popular with most of the Dutch. In 2002 he died. Three sons were born of the marriage: Crown-Prince Willem-Alexander Claus George Ferdinand (April 27, 1967), Johan Friso Bernhard Christiaan David (September 25, 1968), and Constantijn Christof Frederik Aschwin (October 11, 1969).

Beatrix succeeded her mother Juliana as Queen of The Netherlands in 1980 and still reigns. For her work during the year 2008 she received a salary of 4,2 million euros from the Dutch State. She has not indicated if or when she intends to abdicate. Beatrix' mother, Juliana, and grandmother, Wilhelmina, both abdicated in old age and went into retirement; it is expected that Beatrix will do the same in the near future.