From Citizendium
(Redirected from Archeology)
Jump to navigation Jump to search 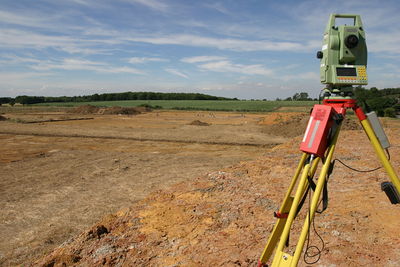 Archaeology (alternatively archeology) is the study of the past through the materials left behind by human activity. Methods include invasive practices such as excavation and non-invasive procedures such as the use of geophysics.

According to archaeologist Philip Barker, "it is unlikely that there are many ancient manuscripts left to be discovered. Inscriptions will be dug up from time to time, ... but there is little doubt that, in the future, new information about the past will derive chiefly from archaeology and from fieldwork, and excavation in particular."[1]

Development of the study

The Renaissance saw growing interest in collecting objects for aesthetic reasons, which was a precursor to museums and the study of material culture. One such collection was donated to the University of Oxford and a museum to house the collection opened in 1683 (the institution would later move to larger permises and become the Ashmolean Museum). The Grand Tour – a journey round Europe for those of wealth and independence – saw people become more interested in historic sites.[2] However, it was not until the 19th century that archaeology emerged as a discipline with methods of recording and preservation. The subject was influenced by principles of stratigraphy, developed in the 17th century by the relatively new study of geology.[3] Archaeology helped shed light on the early history of humanity. The idea that the world was a few thousand years old, based on creationism, was challenged by evidence that man had existed long far longer. As a result, the term "prehistory" was coined.[3] 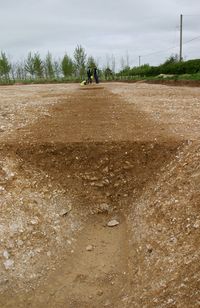 (CC [2]) Photo: Wessex Archaeology
Differences in soil colour can indicate an archaeological feature. Here the darker soil at ground level in a straight line marked the position of a ditch while excavation revealed its shape.

A variety of sources can be used to identify archaeological sites; while some sites survive above ground, others are buried and only earthworks are visible. Aerial photography can identify sites just below the surface which may go unnoticed from ground level. Grass or crops growing above a feature such as a buried wall will have less soil to grow in, so grow differently to plants in normal conditions. Aerial photographs are particularly useful for identifying these marks. The morning or evening are best for taking aerial photographs as the low angle of the sun casts long shadows which help highlight even shallow earthworks. Infrared photography (which focuses on the area of the electromagnetic spectrum close to visible light rather than the range used in thermal imaging) also helps highlight these features.[4][5] In 2011, infrared photography in Egypt led to the identification of 3,000 settlements, as well as 17 buried pyramids.[6] Aerial photography allows for a much greater area to be examined than would be possible otherwise.

Non-invasive techniques allow archaeologists to collect information about a site without excavation and the damage it incurs. Field walking is the practice of retrieving finds from the topsoil to assess activity in the area. The technique is most useful on farmland, where periodic ploughing reveals new soil. Geophysics encompasses several techniques which measure different properties of the soil. The most common are resistivity and magnetometry.[7] 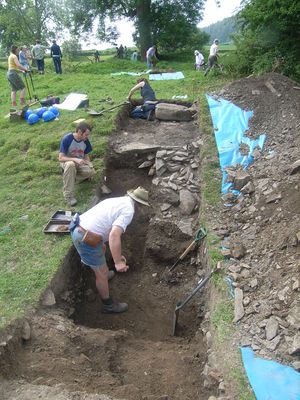 Dating archaeological contexts and finds is essential to providing a chronology of a site. Methods for dating can be divided into two groups: relative and absolute. Relative dating is the process of establishing a chronology and placing events or artefacts within this framework. Two common methods are stratigraphy and typology. Typological sequences can be constructed when there is a development in design of an object.[8] Mobile phones, for instance, started off as large and bulky devices. Over time they became smaller, and a acquired new features; aerials fell out of use, cameras became common, and the number of buttons decreased as touch screens became more common. Therefore it is possible to take an example of a phone and place it within a certain stage of development without the need to know the precise date the model was manufactured.

Absolute dating seeks to apply date ranges to a particular event. Before the development of scientific techniques, this relied on historical documents. The different methods of absolute dating each have their limitations, and in the case of documentary sources the writer’s reason for recording something needs to be scrutinised. Also, the amount of documentation surviving from certain periods and in different societies varies.[9] In some cases dates can be gleaned from inscriptions, a building may have a dedication marking when it was built, or objects such as coins may include the year they were minted, or the ruler who issued them.[10] Dendrochronology uses tree rings to date a piece of timber. The changing seasons create a distinct pattern of thick and thin rings. When enough samples have been compiled to established a record of tree ring patterns extending into the past, they can be used to date a piece of timber.[11] The most common method for producing absolute dates is through radiocarbon dating. Carbon-14, a radioactive isotope, is found in all organic matter an decays at a constant rate. As it is absorbed only by living organisms, by measuring the amount of carbon-14 in an organic sample it is possible to work out its age. It is effective for samples up to 70,000 years old.[12][13]

Absolute dating techniques are most obviously useful when there is no historical record in which to place archaeological discoveries, however they can also be used to challenge established chronologies. For example a building may be dated using typology to the 14th century, whereas examination of a timber recovered from within the building may produce a different date. If it is earlier than expected, it may challenge the established typology.