Due to technical limitations, this article uses an unusual title. It should be called  5"/38 caliber gun. 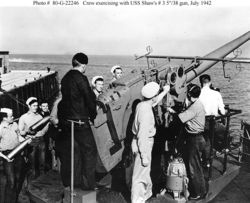 The 5"/38 could project a 55 pound (25 kg) projectile for ranges up to 18,200 yards (16.6 km). In its antiaircraft role, it had a ceiling of 37,200 feet (11,300 m) at 85 degrees elevation.[1] Millions of rounds of ammunition were produced for these guns, with over 720,000 rounds still remaining in Navy storage depots in the mid-1980s. The load consisted of a powder charge in a brass or low-alloy steel casing and a separate projectile. Many types of projectile were available, including AA Common, semi-armor piercing, proximity fuze/variable time (VT) fragmenting and high explosive (HE), point- and base detonating HE, white phosphorus and illuminating star shell. 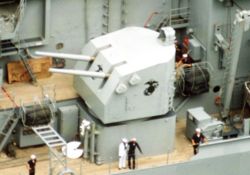 There were several models of the 5"/38, differentiated by the word Mark (or its abbreviation MK) and a number. The 5"/38 MK 12 was a single-barrel open unit widely used on amphibious ships, auxiliaries, and merchant ships. The 5"/38 MK 30 was a single-barrel enclosed unit widely used on destroyers. The 5"/38 MK 38 was a dual enclosed unit specifically designed for newer destroyers. All of these models were also used on aircraft carriers, battleships, and other large combatants.

Depending on the mount, a 5"/38 caliber gun could have a crew of up to 14 personnel, nine in the gun mount and 5 in the handling room. In US service, most gun crews were US Navy personnel. Even the civilian Merchant Marine ships had a small detachment of the Navy Armed Guard on board to operate the 5"/38 and other guns. One exception to this was on ships with a Marine Detachment, where the Marines manned one of the mounts, usually decorated with the Marine emblem.